"Suppose you were an idiot..." 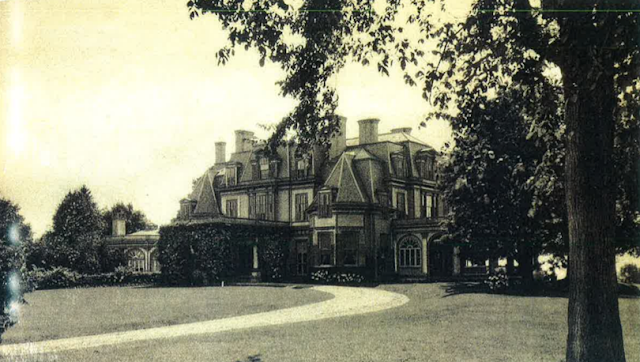 "Suppose you were an idiot," Mark Twain once said, "and suppose you were a member of Congress; but I repeat myself." The subject of next week's "Big Old Houses" is Mr. Clemens' house. Unfortunately, I couldn't photograph and write about it in time for this week.

The astonishing looking Mark Twain house in Hartford, CT was designed by the same man who designed the astonishing looking "Millbrook Farms," seen in the vintage images above and below. Millbrook Farms, in Dutchess County NY, belonged to George Hunter Brown, the man who brought the railroad to my hometown of Millbrook in 1869. Well, it wasn't called Millbrook then. The station's location, equidistant between a pair of competitive pre-revolutionary settlements named Hart's and Mechanic, represented a sort of Compromise of Solomon. These hamlets began to wither almost as soon as the trains began to run. Meanwhile the new station and the growing village surrounding it flourished. New station and new village were both named Millbrook, in honor of Mr. Brown's nearby estate.

"Millbrook Farms" was demolished over 70 years ago and the site has reverted to a wild woodland. To get you in the mood for next week's post on the Mark Twain house, however, I'm lifting a few paragraphs about Millbrook Farms from my book, "Old Houses in Millbrook," published in 2012 by The Millbrook Independent.

Millbrook Farms was designed by a celebrated Victorian architect named Edward Tuckerman Potter (1831-1904). Potter is considered by some to have been among the era's most experimental designers. Certainly he was a man with an eye for the complicated. His comissions ran the gamut from the famous Nott Memorial, which looks like nothing so much as a great stone nipple extruding from the campus of Union College in Schenectady, NY, to the bewilderingly complex Stick Style manse of Mark Twain in Hartford, CT., to the George H. Brown house in Millbrook, NY. The latter was described by a breathless writer in "The New York Times" as "wide stretching in massive splendor, the likes of which is seldom seen on this side of the Atlantic," a judgement which, in its latter part anyway, is inarguably true.

In 1877, scarcely ten years after its construction, financial fallout from the Panic of 1873 forced Brown's eviction from Millbrook Farms...(By 1899) the estate's 335 acres - including house, barns, cottages, manager's house, mill, carriage house and 2 picturesque gatehouses - were transferred to...(Edwin Thorne)...subject to assumption of an existing $20,000 mortgage from Equitable Life.

The Thorncrest estate, as Millbrook Farms would now be called, continued to be much admired. A 1904 issue of "The Millbrook Mirror" doubted there existed anywhere "in this section of the country a more complete or beautiful country seat." Thorncrest's greenhouses had made the estate's horticultural successes "noted throughout the hemisphere." Its farm raised "the most costly cattle in the world," animals that had won "fame and respect throughout the Universe." Its owner, Samuel Thorne, was "revered in Millbrook," certainy by the author of this article.

The main house at Thorncrest was a vaguely chateau-esque confection whose Loire-Valley-on-Steroids roofline looks as if it might have begun leaking within weeks of completion. Topped with a forest of chimneys and ornamented with a plethora of pedimented dormers, the house could only have stunned approaching guests. The focus of the main facade was a pair of engaged octagonal pavilions topped with conical peaks, flanking an enormous porte cochere. An open piazza extended to the west, no doubt enjoying superb Catskill Mountain views, while a ballroom wing almost as long as the house itself extended to the east.

The Brown-Thorne house had a "big-ness" typical of many American structures built in the post-Civil War period. You can see the same scale in the Seventh Regiment Armory or the Tweed Courthouse in New York, or, closer to Millbrook, in the original buildings of Vassar College. The window shutters visible in these photos are still stored on the second floor of Thorncrest's extant but sadly deteriorated carriage house. They must be ten feet high.

According to local legend, during the pre-demolition auction of Thorncrest's contents, thousands of leather bound books, stacked ceiling high in the dark paneled library, didn't garner a single bid. Rather than pay a trucker to haul them away, they were left on the shelves and bulldozed into the foundation when the house was demolished. 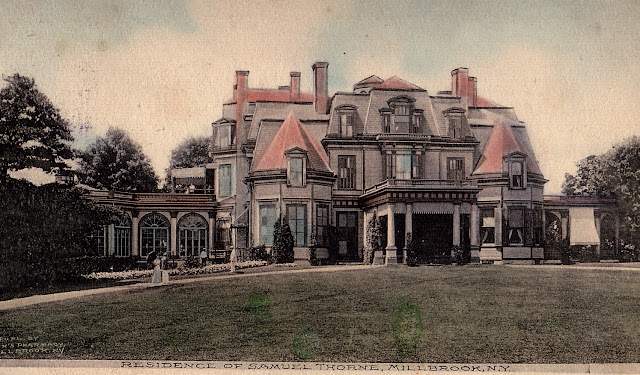