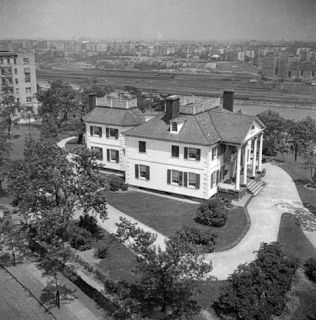 Here is "Mount Morris," now called the "Jumel Mansion," taken from the roof of an apartment house on the corner of West 160th St. and Jumel Terrace, probably in the 1930s. That's my guess anyway, judging from the awnings on the apartment building in the distance at left, on Edgecombe Avenue and 162nd St. The house is notable for its elegant Georgian portico, octagonal drawing room, and lofty perch from which endless miles of wooded Manhattan and Bronx countryside were once - and still are, save for the woods - visible. Mount Morris was built in 1765 by two sophisticated socialites, Colonel Roger Morris and his wife Mary Philipse. Educated, attractive and well connected in high Colonial circles, Morris had been a comrade in arms of Washington. His wife was one of the great Hudson Valley landowning Philipses.

However, the Morrises were Tories, fled to England at the onset of the Revolution and never came back. Interestingly, Mary Morris and her sister were the only American women accused of treason during that conflict. Mary died in England in 1825, surviving her English husband by 31 years.

Washington occupied their abandoned house in 1776 during the Battle of Harlem Heights. His stay was a typically short one, since that battle, like most of the battles in the Revolution, was one more in a series of strategic American retreats. According to some we didn't so much defeat the British as wear them out with endless retreats. 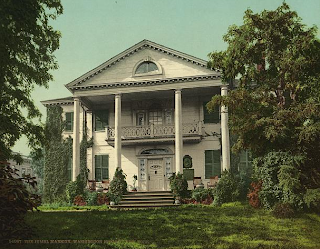 It's a shame that nobody lets historic houses get ivy-covered any more. It may be bad for the structure but it sure looks good. This postcard view might have been taken in the 1940s or '50s. The house is appealingly run down, a description that could have fit much of New York in that era.

In 1790, during the early years of American independence, Washington stopped here for a celebratory dinner attended by, among others, Jefferson, Hamilton and the two Adams (father and son). Around this same time the government confiscated the house and sold it to operators who, for the next 20 years, ran it as an inn called the Calumet Tavern. Smart society came to its rescue in 1810, when a rich Frenchman by the name of Stephen Jumel and his American wife Eliza bought and refurbished it. The Jumels led the period analog of a jet set existence, dividing their time between Europe and America. In 1828 they filled their rural American country house with French Empire furniture - some of it supposedly the property of former Emperor Napoleon himself - and in the process set the local fashion bar pretty high.

Jumel died in a carriage accident in 1832, and a year later his widow surprised one and all by marrying the notorious former United States Vice President, Aaron Burr. Gore Vidal's wonderful novel "Burr" has delicious passages describing the imagined wedding night of the elderly couple, whose "co-mingling of aged flesh" is more than the fictional narrator of the story cares to contemplate. Burr died in 1836, shortly after divorcing the former Madame Jumel. She continued to live in the old house until 1865, dying there immensely rich and quite alone. 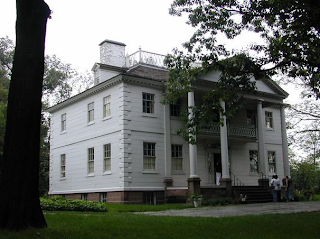 Here's the old place today, all cleaned up but alas no longer very atmospheric. Maybe it's my corrupted taste, but I do like old things just a little run down. A friend warned me many years ago that there was a fine line between shabby and sordid, a point well taken. But I digress. After Madame Jumel's death, the house remained in private ownership until the spreading city made pretensions to being any longer in the countryside too preposterous. New York City bought it in 1903 and in 1904 it was opened to the public as "Washington"s Headquarters," operated by the Daughters of the American Revolution. 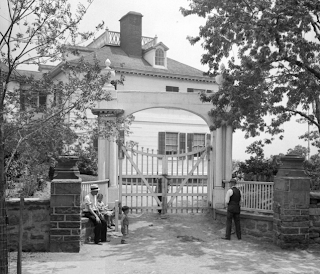 Here's vintage shot of the public entrance to the house. It doesn't look like this anymore, worse luck, but I thought I'd include it anyway. We're fortunate that Mount Morris is still with us, in "mint" condition as we like to say in real estate, and still on its original site. Of Manhattan's three surviving country estates, it is the grandest and the most accessible to the public.
Posted by John Foreman at 3:36 PM