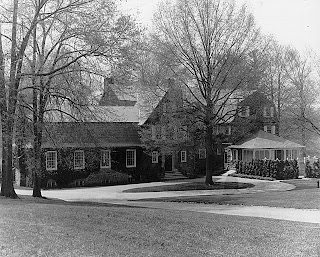 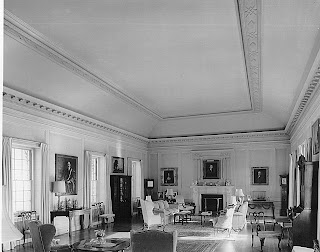 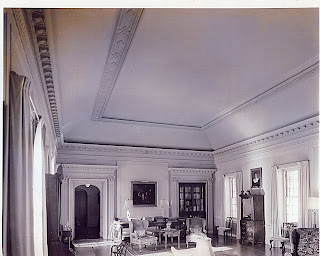 My daughter grew up at Daheim, a house with a "front room." I'm not really sure why we never called it the living room, but we never did. Our front door opens directly into the front room, which in turn opens in a straight line into the library, the stair hall, and the dining room, a linear distance of about 100 feet. This has impact, but nowhere near the impact of the "big room" in the family home of my Philadelphia friend, Ms. Penrose. Horace Trumbauer added it around 1912 to Barbados Hill, her father's house on the Main Line in Devon. It's the big wing on the left in the exterior view. Ms. P's father, Dr. Penrose, rescued the marble fireplace from the demolition of the famous Albany in London. Underneath the big room was a huge model train room whose coved ceiling obscured an enormous secret vault. Warned by Senate colleagues of the inevitability of Prohibition, Grandfather Penrose filled it with demijohns - being over-scaled short-necked bottles typically encased in wickerwork - of the "good stuff," purchased on a special trip to Scotland. Senator Penrose enjoyed it until his death in 1921. His son, Dr. Penrose, finished the last of it in 1956, at which point it had become, according to his daughter, "magnifique." The house still stands, but is no longer in the family.
Posted by John Foreman at 6:06 PM